Some thoughts from director Karen on the passing of two years since the death of her Mum Ann, one of our film's stars: 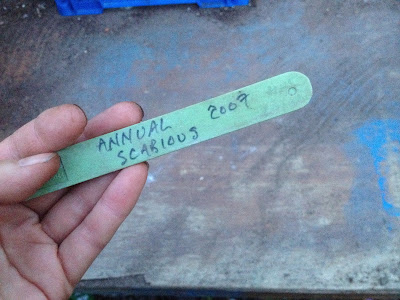 Two years exactly since Mum's death, and I spend a solitary weekend on the kind of pursuits that filled most of her life - Gardening, baking, sewing, cleaning cupboards, fruit-picking and making jam. She wraps herself around my every task, especially in the kitchen - her natural domain. I hear her chide my disorganised worktop, she slurps the foam from the jam-spoon with relish, checks my jars are clean, worries about the set.

I haven't written down much lately, apart from lists and administrative emails. Lots of them.
But the writing-in-my-head hasn't stopped, though 'The Closer We Get' - where it all went for 4 years - is done and dusted and out in the world now.

And that feels very strange, and rather sad. Where should all those thoughts on grief and bereavement, joy and wonder, go now? In Julian Barnes' fine book, 'Levels of Life'  - written in the aftermath of his wife's death - he divides the world absolutely, thus - when we are young, by those who have had sex and those who haven't. And then - usually, though not always, later - into those who have grieved the death of a loved one. And those who haven't. Yet, that is.
Perhaps I am now in Barnes' own farther-flung category - those who have shown the world that grief, for a while.

Both the significant and insignificant things I inherited from Mum are now embedded in my domestic and working landscapes, like a matrix of archaeological finds suspended in insignificant mud. But only I would know them as special - I dry my hands on an old striped towel I rescued from her house as we emptied it, I cook with a packet of cornflour from her cupboard, I swallow a vitamin pill from a bottle she began, use her German stapler on my desk.

Mum shared my passion for plants and gardens. In fact it was our strongest bond in my wayward teenage years when we could barely speak to each other civilly, and yet could happily visit the local garden centre for hours together, a boot-full of plants and a treacle scone in the tearoom to recover from the array of choice. She insisted she lacked expertise as a gardener, and yet she effortlessly grew enormous, slug-free clumps of some of the choicest plants we found together.  She always deferred to my tastes when it came to her garden, perhaps regretting it at times. I remember a year or so before she died, she told me, from her wheelchair parked up at the window, 'I really miss that wee patch of lawn we dug up, you know".
For over a year after Mum's death, gardening - which I'd done so habitually since childhood that I wouldn't even call it a 'hobby', to me it was just something I always did a great deal of -  meant suddenly very, very little to me. The ebullience of nature felt like an affront, how dare it return? Gradually though, we have found each other again, and I take pleasure in the imaginary chats I have now with Mum as I garden - she'd 'shoot the boots off that cat'who's done its business in the border, and she'd certainly have those goosegogs in the freezer by now.

I find this plant label (pictured above) at regular intervals during my sessions in the garden now, and it always stops me in my tracks. Somehow I don't want to 'save' it indoors, I want it to live the ad-hoc life it should have had, a life of insignificance, not the life of a memorial. In Mum's neat hand-writing - note the 'dashed' number seven, another thing I inherited from her -  a sowing of hardy annuals is recorded. I hope they came up, and I hope they were beautiful. Because 2007 would be the last summer before her stroke changed everything. Summer 2008 was spent in hospital, windows jammed shut, garage flowers at the end of the bed. The later ones were spent wheeled out onto the specially-modified deck at home, watching me fight back the ever-increasing wildness of the garden and murmuring appreciatively when I brought tiny cut flowers to her table for her close inspection.

Last summer, we planted a young tree in the churchyard garden in Mum's memory - a spot overlooked by the handsome big house that was our family home for over thirty years. It's not doing well, apparently, so out it must come. Mum would be unsentimental about such a thing. I think we should replace it with one from the garden centre up the road, the place that kept us together all those years ago. "Well, what on earth are you waiting for?!" I can hear Mum say impatiently.

First published in Tales from there Rural Laptop