For Ian, on Father's Day

Here is an extract remembering my dad, from a longer memoir I've been working on lately, inspired by making The Closer We Get: 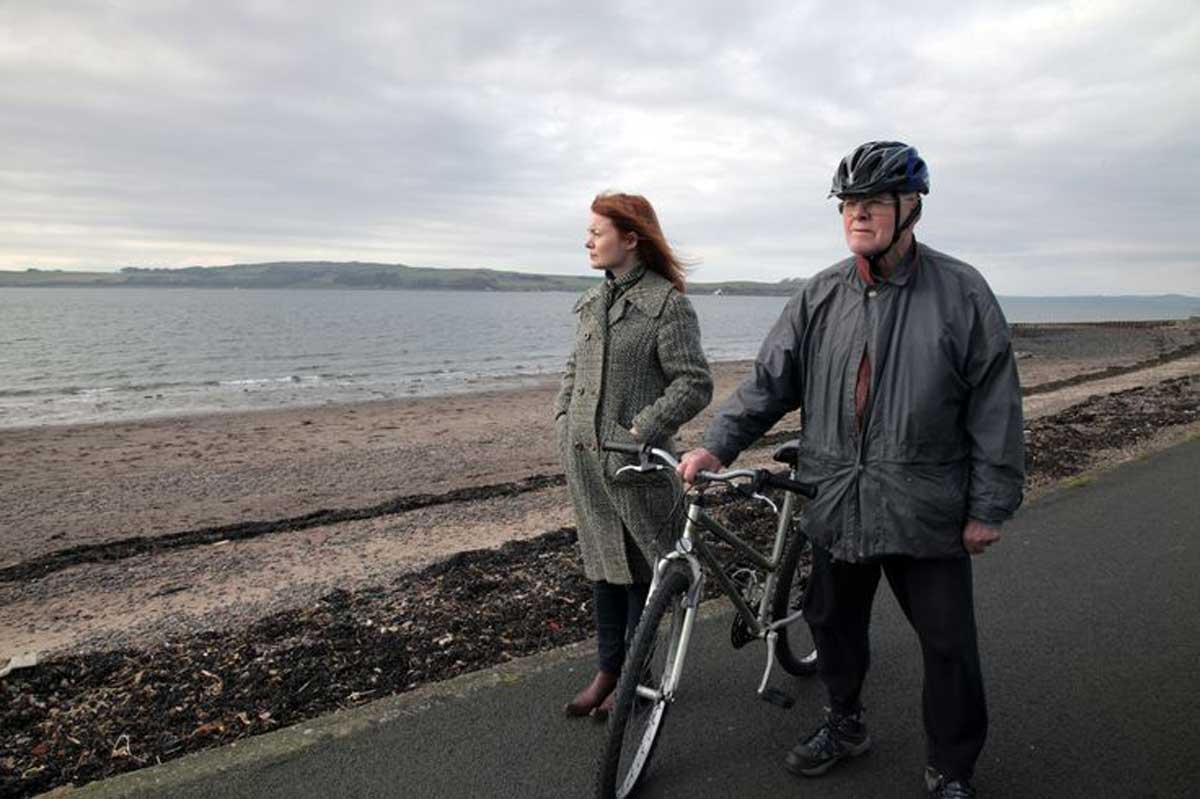 Dad trained hard most evenings, changing into shorts and removing his dental plate before ploughing up and down the Largs seafront promenade that connected our house to the town. After an hour or so of grimacing with effort against the onshore wind, his return home would be announced by the front door swinging open heavily. This was one of the few occasions he used the front door, in fact. A gust of wind from the seashore seemed to accompany him, and - as ever with Dad – it was never a quiet entrance. He’d drop down onto to the hall carpet and summon one of us kids out from our homework to sit on his feet as he finished with a few dozen sit-ups. He would tease us, leering over us sweatily, and we laughed hysterically at his toothless grin, feigning to wince at his smell but secretly entranced by his energy, his magnetism, his selfish determination.

He’d then wash for dinner in the downstairs bathroom, using the landing in front of it to dry himself off – he claimed the bathroom was too small for a man used to rugby changing rooms. As this landing was directly opposite the front door, it was all too easy to return home and chance upon him ‘in the skuds’ as nakedness was known in our family – but he was never embarrassed, he just larked about making the towel into a bullfighting cape or a sheik’s headdress until we laughed along with him too.

Dad’s primary parenting tool was humour, in fact, with Mum covering everything else. Unlike most of Mum’s skills, laughter could be hastily deployed – and anywhere. It didn’t need forward-planning, in fact it hated routine. It could not happen without an adoring audience, and Dad’s scarcity at home certainly guaranteed one in his four kids.

I had a prodigious talent for sulking, it was my go-to response to most circumstances that didn’t go my way. And being a third child of four, most things didn’t go my way. When the family had to spend a wet day hiking, I would sulk. When it was banana bread for tea, I would sulk. When Mum bought me a cheapo anorak without asking my opninion first, I would sulk. I orchestrated these sulks with increasing strategy as I got older. It was dangerously easy for nobody to notice you were sulking in our big house, and that was obviously a total waste of time and effort. So I soon learnt it was important to choose the location of the sulk well – clearly it couldn’t take place in the upstairs rooms – such as our bedrooms – as no one went up there unless it was to sleep, and besides, there was no central heating and there was a limit to how much I really wanted to endure for my art. The kitchen rarely worked either, as it was Mum who usually caused the sulk and she was invariably in there – the flouncing out of the room that was the prelude to the sulk was a vital dramatic effect, and you could hardly follow it by returning unannounced just to sit and scowl in the corner. The playroom was an enjoyable place to carry out a sulk, as there were limitless, fun things to do in there meaning I only had to put the sulk back ‘on’ briefly when someone came through the door. The downside of that room was that in fact my parents didn’t often come in there – it was largely and gloriously out of bounds for them – and as it was Mum (and only occasionally Dad) that I wanted to punish with the sulk, there was a real risk that they might never ever find out about the brilliant sulk I had conducted in there all afternoon.If Dad was around, he made it his personal mission to rid me of my precious sulk, however it had arisen. If Mum mentioned my condition to him privately, he would search the house high and low until I was found, perhaps pretending to read a book in the lounge, or if the weather was good, mooching around in the garden, picking up ladybirds or confiding all to the rabbit in her hutch. Dad wouldn’t call out to me, he’d sneak up and then would get down onto his haunches right in front of me. He’d bob his head back and forth but I would not look up, of course. Then came an onslaught of interpretations of the chain of events that – as far as he knew – had caused the telling off from Mum that had spawned the sulk.

“A little bird tells me that a certain person fed her teatime sausage to the dog, and thought she’d get away with this heinous crime....”

“Soooo - you and both of your brothers were in the garden playing football, and somehow your sister Alison pushed herself down the stairs – have I got that right? Well, I guess there’s no need to check the CCTV footage in that case, as you’re so clearly telling the truth”

“What will Mrs Dorman think when she finds out that her star pupil has been sent away to her Auntie Judith’s in Taynuilt, for being such a naughty girl? Well, I expect you might get a Christmas card if you’re lucky enough to be remembered by her and the rest of the class, but Judith only has room for you in the garden shed, you know.”

Each sentence was delivered with a painstakingly dry comic inflection. It was very hard indeed to hold my ground and soon I was unable to resist glancing up at Dad in front of me - fatal. Within a few seconds I was giggling along with him despite my strenuous efforts to remain po-faced.

Triumph would sweep across his face, and standing upright again, he’d say, gently,” C’mon bumblebot” taking my hand and leading me back indoors.